The upcoming visual novel will feature 113 Digimon that you can recruit and is estimated to take about 40 hours to complete.

It's looking like Digimon Survive is still a ways out, following several delays--the most recent of which pushed the game's launch to 2022. That hold-up seems to be the result of the development team changing mid-way through production, causing Digimon Survive to undergo numerous reworks. The team is now asking players to just wait a little bit longer.

"We are now developing the game with a new development team," Digimon Survive producer Kazumasa Habu said at a Q&A session during Digimon Con 2022. "Changing teams has led to a lot of rework on the game, leading to delays. This caused a lot of uncertainty that prevented us from giving regular updates."

According to Habu, development of Digimon Survive is now "back on track" and the team is getting closer to completing the game. "As for the release date information, it is expected to take a little longer as we are still adjusting it internally," he said.

Habu hopes that fans are able to "wait a little longer," before going into further detail as to what fans would be able to expect of Digimon Survive.

A visual novel with tactics-based turn-based battles, Digimon Survive is described as something similar to Fire Emblem. According to Habu, Digimon Survive will feature 12 chapters, and from Chapter 8 onwards, the story will branch into three directions depending on a player's choices: Morality, Harmony, or Rage route. Reaching the conclusion to any of these three routes will also reveal the potential of a fourth secret route.

Habu added that each route will take about 40 hours to complete, and that utilizing the fast-forward function on subsequent playthroughs during conversations should allow players to view every possible route and endgame content within 80-100 hours.

In Digimon Survive, you'll be able to team up with and train 113 different Digimon, Habu said. And unlike Pokemon, where expanding your team is dependent on beating your foe into submission and capturing them, Digimon Survive focuses on building friendships with your potential new allies. During battle in Digimon Survive, you can converse with your foe instead of fighting them--listening to your opponent and answering their questions in a way they find satisfying will cause them to team up with you, expanding your roster.

Digimon Survive is scheduled to launch for Xbox One, PS4, Switch, and PC. 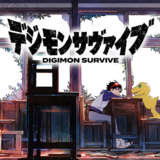