Bandai is bringing a new Digimon fighting game to the Xbox and GameCube.

Digimon Rumble Arena was first released on the PlayStation back in 2001. It was a fighting game that featured many of the colorful characters from the Digimon cartoon series. Bandai has now announced the follow-up to that game, Digimon Rumble Arena 2, for the Xbox and GameCube.

This newest Digimon Rumble Arena will feature the same brand of 2D fighting as its predecessor. More than 40 different Digimon monsters will be playable in the game, each with its own special, unique moves. Using signature moves will earn you digipoints, which you can use to digivolve and destroy your opponents. The characters featured will be from all four seasons of the Digimon cartoon series, including several secret, unlockable Digimon. 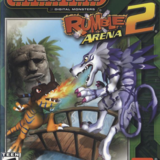