We get our first details on Bandai's upcoming kart racer for the Game Boy Advance.

Following in the tradition of other popular licensed properties that have successfully made the transition to kart racing spin-offs, Bandai will release Digimon Racing for the Game Boy Advance this August. Based upon the popular, Pokemon-esque cartoon series, Digimon Racing will feature more than 40 playable Digimon forms from the television series, and you will be able to race them across 15 different tracks, based in environments such as lava fields, jungles, and cities. Racers will be able to "Digivolve" during a race to give them an advantage, and secret Digimon will also be unlockable in the game.

Digimon Racing will include several modes of play, including single races, time trials, cup races, and boss challenges. The game will also support linking with other Game Boy Advances for up to four-player, head-to head multiplayer. We will have more on Digimon Racing from the E3 2004 show floor. 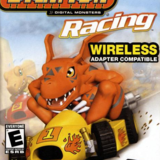