"I believe that those of you who actually have the game in your hands are more than satisfied with how interesting and fun the game is."

Tomonobu Itagaki, creator of the Wii U game Devil's Third, has responded to the action game's poor review scores. GameSpot gave the game a 3/10, while other critics aren't in love with it, either.

In a message posted to Facebook, Itagaki acknowledged that Devil's Third received some "pretty awful" review scores, particularly in Europe. He admits that some of the criticisms are "fair," but took issue with the manner in which some reviewers critiqued Devils's Third's online multiplayer mode.

"In general, I'm going to guess that most of the people reviewing the game weren't given a chance to evaluate it properly," he said. Just as one example, we designed the online multiplayer mode to be enjoyed together with tons of people, but it seems dozens of reviewers were only allowed to try the game in a closed environment.

"That's extremely unfortunate for everyone involved," Itagaki added. "As you can imagine, no one can effectively evaluate the playability of multiplayer games under these conditions."

The veteran game designer, whose previous credits include the Ninja Gaiden and Dead or Alive franchises, said he values fan feedback "much more" than review scores from critics.

"Please enjoy the game for yourselves," he said. "After that, let me know everything about what you're thinking, so that we can make a better future."

Devil's Third, which combines shooting and hack-and-slash elements, was originally going to be published by the now-defunct publisher THQ. At the time, it was an Xbox 360, PlayStation 3, and PC game, but later shifted to become a Nintendo-exclusive on console. The game was released in Japan and Europe in August, and comes to North America this December.

A free-to-play PC version is also due out later this year. 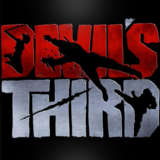