Dev Who Threatened to Kill Gabe Newell Gets His Job Back

The developer "couldn't commit" to his resignation.

Mike Maulbeck, the Code Avarice developer who got his game pulled from Steam after tweeting death threats addressed at Valve's Gabe Newell last month, is back at his job despite announcing his resignation.

"This is probably not hugely surprising to some of you, but Mike couldn't commit to his decision to leave Code Avarice," the developer said on its website. "[Co-founder Travis Pfenning] publicly denounced his departure, and in the weeks following his official stepping down Mike had second thoughts. Looking for a new source of income was extremely overwhelming and when it finally came time to put pen to paper, Mike and Travis agreed the best thing to do would be to have Mike return to Code Avarice."

Code Avarice's game, Paranautical Activity, was initially highlighted on a Steam store segment featuring Halloween-themed games. Paranautical Activity was mistakenly captioned as an Early Access title despite being completed, to which Maulbeck tweeted the death threats.

Code Avarice said that it's taking step to be more about the games and less about the people making them. Future blog posts won't be attributed to individual developers, and Code Avarice created an official Twitter account so you don't have to follow personal accounts. 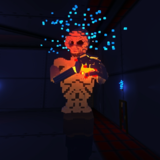