We get a sneak peek at the E3 demo of Ion Storm's promising first-person action RPG that's due out this fall.

It has fantastic graphics, cool characters, and a compelling conspiracy thriller story that you don't need to be a sci-fi fan to love. Deus Ex: Invisible War's potential seemed evident the first time we heard about the game, but putting together a project this ambitious hasn't been easy. Although the name's gone through a few changes along the way, Deus Ex: Invisible War is one game we've been watching closely over the last year--starting as a tech demo and eventually becoming fully playable. A recent trip to Ion Storm's office in Austin, Texas, afforded us a sneak peek at what the team has in store to show at E3 next week. And even though Ion Storm's studio director Warren Spector has been, until now, very secretive about the game's release date, we now know to expect it this October.

The Xbox version of Deus Ex: Invisible War will be readily playable at Eidos' booth at E3. It can take quite a bit of effort to put together an E3 demo--for efficiency's sake Ion Storm has taken the E3 deadline to be a milestone for tightening up the overall game. The three E3 levels will appear in the final game nearly unchanged. The real difference will be in the tutorial-like clues that will pop up to guide show goers through action-oriented missions, which are otherwise intended to take place after you're familiar with all the abilities of the game's two playable characters, the male and female versions of a nano-augmented operative named Alex D. While we're focusing here on the latest news on Invisible War, you can get more general details in our in-depth preview from February.

The level we saw the most of takes place at a corporate campus outside of Seattle. Throughout the game, you'll be able to choose from the different mission objectives presented by the four different factions in the game, and the Seattle level is no different. One way to finish the level involves killing a key scientist, and the other involves stealing a prototype railgun. Of course, in classic Deus Ex style, you can pass each challenge in the level in a variety of ways, by using stealth, special items, or special abilities to outsmart enemies and bypass the static defenses, or simply by trying to go in with guns blazing. Stealth isn't as easy in the outdoor spaces of this particular level simply because it's one of the rare levels set during the day. We watched as Ion Storm's lead programmer Chris Carollo took out guards and security bots with the game's astonishingly slender rocket launcher, which is one example of how technology has advanced over the years since the first game.

The E3 demo will also include a level from the Antarctic Versalife base, which was shut down at the same time JC Denton infiltrated the Versalife Hong Kong office in the first game, but there's now a revolutionary group that has set up in the area. This mission takes place at night, deep in the installation, and will be a better place to practice stealth by hiding in the game's dynamic shadows. The third level is set in Trier, Germany, where a terrorist organization is holding up a church. It's your job to get inside and retrieve critical data from a computer. We mostly saw the demo in action on the Xbox and only got a brief new glimpse of the PC version of the game, which will only be demoed off the E3 show floor. But the game is being simultaneously developed for both platforms, and the improvements we saw to the interface and general performance of the game apply to both versions.

The three E3 levels represent just a small portion of the game, which is broken up into 36 levels. Ion Storm has said that Invisible War won't be as long as the rather drawn-out first game, but while the new levels won't be quite as large, they're said to be much more densely populated with mission challenges and characters to interact with. Since the levels will be smaller, you won't be required to hike from one side of town to the other, which should keep the game's pacing somewhat more constant.

The first new feature we noticed in the updated version of the game was the futuristic circular interface, which Ion Storm discussed in previous months and which is now implemented and working in the game. The light-blue interface is designed to look like a nano device imprinted on Alex D's retina, and to reinforce this effect, it's transparent and contains slick-looking rotating elements. At the top of the screen is a compass, and a light meter will help you know when you're hidden in shadows or not. On the left of the screen is an array of items and weapons you can choose from. In the upper-left corner is the health meter and the lower-left corner shows the current ammo count. The right side of the screen shows all the biomod abilities you have available, as well as a readout on your biomod energy level. The interface is still being tweaked, but Ion Storm says that early testing has proven that this conceptualized approach is quite playable. While the team had once feared that the circular HUD took up too much screen real estate, the player-customizable transparency helps keep the action visible.

Ion Storm seems to be making good progress in optimizing its advanced graphics engine, which has presented some technical challenges because of the Doom III-like dynamic lighting. Producer Bill Money claimed that there's been performance improvement of around five frames per second since GDC, where we last saw the game in early March. The Xbox version is now running much more smoothly, roughly 20fps, though shootout sequences can result in some stuttering. Money noted that the game is currently running at about 30fps on high-end PCs, and midrange PC performance is on par with that of the Xbox. The big optimization push for the Xbox version is still to come--a specialist will be going over the code line by line after the team is back from E3.

When Spector told us with absolute confidence that Deus Ex: Invisible War will ship in October, we were curious how Ion Storm is planning to manage the risks involved in testing such a branching game design. Spector noted that the team has automated testing tools conceptualized that will be put into use this summer when Ion Storm starts the final balancing and polishing of this complex game in earnest. With these tools, the designers won't have to rely on anecdotal accounts of the paths that testers took through the branching game but will instead get direct data on what got players' attention and what didn't. If they find that testers don't find or bother visiting an optional area, Spector said that data will give them reason to immediately cut it or change things around to make it more prominent.

Ion Storm Austin has been working weekends to make its milestone and put the finishing touches on the E3 demo. We'll have the opportunity to spend more hands-on time with the game at next week's show, and we'll be watching the game closely as its release date approaches. In the meantime, check out our exclusive video interview with Warren Spector. 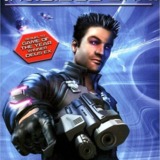