Game director Jean-Francois Dugas talks to us about what it's like to create a sequel to one of the most respected games of all time.

Deus Ex has become one of the most beloved games of all time since its release at the turn of the century, so it's no surprise that Square Enix is hoping to resurrect the franchise with prequel title Deus Ex: Human Revolution after 2003’s poorly received sequel, Deus Ex: Invisible War.

Deus Ex: Human Revolution treats its predecessor with the kind of reverence that you’d expect from such an iconic title. Its innovative concepts--choice, morality, and a hefty inclusion of role-playing elements--have become commonplace factors of modern game design, but developer Eidos Montreal is adamant that Human Revolution will be able to pick up the baton and create its own unique experience.

In anticipation of today's new CG trailer for the game, GameSpot UK had the chance to talk to game director Jean-Francois Dugas about what’s new, what’s familiar, and what, exactly, is the meaning behind some of the game’s symbolic imagery.

GameSpot UK: Why should gamers who have never come across the franchise care about Deus Ex: Human Revolution?

Jean-Francois Dugas: Even though some recent games took a page or two from Deus Ex, we believe that the experience hasn't been done since the original game. With Deus Ex: Human Revolution we're really dedicated to re-creating this unique experience for a new generation of gamers that never experienced what it's all about in the first place.

Deus Ex: Human Revolution is an action RPG set in the near future, 2027. The game lets you delve into a huge and compelling narrative in which you'll meet a great cast of characters, and more importantly, it will let you play the way you want.

GSUK: Why make a prequel instead of a sequel?

JD: Firstly, we wanted a fresh start on the franchise and to make it unique and stand-alone. Therefore, you do not need to be an old Deus Ex fan to appreciate the game--we have a new main character and supporting characters that we’ll encounter during the journey.

Secondly, in the original timeline of Deus Ex, there was an era where mechanically augmented people started to burgeon in society before the event of nano-augmented people. The distinction lies in the fact that nano-augmentations are invisible and the mechanical augmentations are not. We thought it would be an interesting theme to explore from both a gameplay perspective (seeing how your character evolves) and from an ethical/moral perspective (the benefits & dangers of such a world where some can afford to get augmented while others can’t).

One of the major aspects of our story revolves around the social conflict between augmented and non-augmented people. In our story, there are people opposed to augmenting the body since they see it as unnatural and don't think scientists should play God. On the other side, some people think it is the natural evolution of the human race and there's no reason we shouldn't be trying things like this if it can enhance the quality of life or extend it. The gameworld itself will definitely reflect these opposing views, so you will see a contrast depending on where you are in the game.

GSUK: Will Deus Ex: Human Revolution share the same core values as the original game? For instance, will players still be given the freedom to approach objectives in multiple ways?

JD: One of the main things that makes a Deus Ex game is the nonlinear and multipath approach to level design. Deus Ex: Human Revolution's world is full of extra things to find off the beaten path, and you get experience points that you earn for achieving and finding things. So not only will you be able to upgrade yourself even further through the earning of extra experience points, but you’ll also find more ammo, credits, side quests, etc.

As for missions, there is always more than one way to get to the location you need to go. You can try through the main door, but some obstacles might make it challenging for you, so you might decide to look for other ways such as hacking a back door, reaching a roof access, etc. You need to remember that, depending on your play style, the obvious path is not always the best. The different points of access are not always immediately available to all depending on the augmentations you have or not.

Then, once you successfully infiltrate a given location, navigating it will also let you decide how you approach the challenges. Do you want to fight your way in or do you want to stay out of sight, undetected? Do you want to use your hacking skills to open new opportunities or deal with some neutral non-player character to help you out? So, building your character in the way you want to play will influence the available options.

GSUK: It has been seven years since Deus Ex: Invisible War. What made you want to revisit the universe? And why now?

JD: We’re huge fans of the original game, and on a lot of topics we are on the same page as the fans. It is really important to us to respect the core values that made the original game outstanding, but we also know that we need to bring new ideas to the table that will elevate the experience for old fans while adding new levels of excitement and surprises that will draw newcomers into the Deus Ex world. Deus Ex: Human Revolution is going to stay true to the original game on many levels, and of course we’re coming up with new gameplay possibilities, reinforcing the choice and consequence aspect, and introducing a brand-new cast of characters and storylines that will expand the Deus Ex experience for a new generation of gamers and old fans alike.

GSUK: The new trailer shows a sprawling futuristic city, inviting comparisons with sci-fi classics such as Blade Runner. What kind of environments can we expect to see in the game?

JD: We feature numerous locations across the globe, and the ones we’ve spoken about so far are Shanghai and Detroit with more to come. There’s a big range in the environments, from the archetypal cyberpunk look and feel, to modern-day locations and slums, to locations still rooted in the current day but augmented with the technology 17 years in the future.

GSUK: Previous Deus Ex games used nanite-based augmentations, but Human Revolution uses mechanical augmentations. How will this change the game, and what kinds of new features will they bring?

GSUK: The FMV trailer at GDC 2010 showed Adam dreaming of flying close to the sun--similar to Icarus in Greek mythology. What’s the significance of this dream?

JD: The beginning of the video is Adam’s dream. In the world of Deus Ex: Human Revolution, society has mixed Renaissance elements with archetypal cyberpunk stereotypes, and the Icarus myth weaves its way through the story of the game. The Icarus myth dealt with Icarus being given wings to fly. But the wings were made of wax, and he was perhaps not ready for such a gift; so in his haste, he flew too close to the sun, which melted his wings, and he fell to the sea and to his death. This story parallels our Deus Ex universe where mankind is using mechanical augmentations but there is still much to be determined in terms of their effect on society and the ultimate direction it will lead us in. 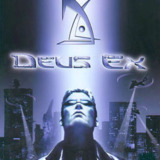