[UPDATE] The petition has now surpassed 25,000 signatures, and GameSpot's Mary Kish has made a video showing what a Danny DeVito-voiced Pikachu might look like in real life.

If you watched the Detective Pikachu trailer thinking it would be amazing to have Danny DeVito play the sleuth mouse, then you aren't alone. One YouTuber created a video featuring the classic Pokemon voiced by the It's Always Sunny in Philadelphia star, and now a petition has been started to get him the gig.

YouTuber Teahollow1 dubbed the original Japanese trailer with DeVito's voice (via Kotaku). Along with It's Always Sunny in Philadelphia, it also features audio from DeVito's role as The Penguin in Batman Returns. You can see the video in the embed above.

The Change.org petition "Get Danny DeVito to voice the English version of Detective Pikachu" has received over 20,000 signatures, and it's only a few thousand away from its goal of 25,000. Of course, it's not going to happen just because the petition reaches its goal, but a person can dream.

The petition reads as follows:

"There are a number of us that feel as though Danny DeVito would be a prime fit for the voice acting role of the Detective Pikachu. We want to make this happen."

Danny DeVito has had past experience playing officers of the law. He played a cop in 2000's Drowning Mona and a stripper dressed as a cop in an episode of Friends titled "The One Where the Stripper Cries."

Detective Pikachu: Birth of a New Duo is a recently-revealed 3DS game set for a Japan-only release at this time.

More details about Detective Pikachu have appeared, revealing that he sucks at being Pikachu. 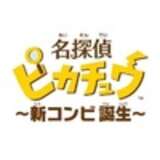