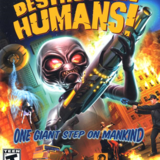 THQ Nordic has continues its rollout of new game announcements just before E3 2019 begins. The latest it has revealed is a remake of the 2005 alien action game Destroy All Humans, where you play as an alien invader on Earth. The tongue-in-cheek action game is slated for release on PC, PlayStation 4, and Xbox One in 2020.

"The cult-classic returns! Terrorize the people of 1950s Earth in the role of the evil alien Crypto-137," the product description read. "Harvest their DNA and bring down the US government in the faithful remake of the legendary alien invasion action adventure. Annihilate puny humans using an assortment of alien weaponry and psychic abilities. Reduce their cities to rubble with your flying Saucer! One giant step on mankind!"

With E3 coming up soon, THQ Nordic said that it would have three games to reveal this week, which has been an inordinately busy one. This is the third of those three. First it announced a remake of SpongeBob: Battle for Bikini Bottom for PC, PS4, and Xbox One. Then alongside the recent Google Stadia presentation, the company announced Darksiders Genesis, an overhead Diablo-like action game featuring the horseman Strife.

This is the last of what's expected from THQ, but you can expect more games and news in all of the upcoming press conferences. We're tracking all the newly announced games at E3 in one place to help you stay on top of everything that's coming.