The Destroy All Humans remake is out now on PS4, Xbox One, PC, and Stadia.

Another remake of a cult-classic game has made its way to modern consoles. Based on the 2005 action-adventure game, Destroy All Humans released July 28 on PS4, Xbox One, and PC. The game is available to purchase now with several editions available, including an extremely pricey collector's edition clearly aimed at longtime fans of the series.

Destroy All Humans is an open-world game set during the 1950s and parodies Cold War-era alien films. The game follows an alien named Crypto, who is part of a race known as the Furons who clone themselves to continue existing. The game opens with Crypto being sent to harvest human brain stems, which contain precious Furon DNA (due to a previous clash between Furon warriors and humans in ancient times) that's crucial to preserving his species. Crypto is also searching for his predecessor, Sporidium 136, who crash-landed on Earth years prior; now, the humans have him as well as Furon technology. As Crypto, you'll burn cities to the ground with your mighty Death Ray, use your Abducto Beam to toss around tanks, crush a farmer under his own cow using psychokinetic powers, and much more. Generally, you're just causing chaos.

The remake earned a 6/10 in GameSpot's Destroy All Humans review. "Destroy All Humans certainly shows its age in places. The stealth missions are rudimentary, the boss fights are tedious, and some poor audio work won't let you forget that this is a game from 15 years ago. However, its core loop of causing destruction and mayhem, laying waste to humans and cities, still feels satisfying. Destroy All Humans often feels like the PS2 game it is, but a fresh coat of paint and updated controls definitely make this remake enjoyable to play through today," wrote James Carr.

Whether you're a fan of the original or looking for something new to play this summer, Destroy All Humans is sure to satisfy any fantasies about what it'd be like to crush human civilization using strange and powerful alien technology. While it's too late to take advantage of the game's pre-order bonuses, you can still check out its pricing and editions below.

If you just want the base game, you can pick up Destroy All Humans' standard edition, which is $40 for consoles and $30 for PC. You can buy it digitally on the Xbox Store, PlayStation Store, and Steam.

It was sold out at all major retailers at our last update, but you can double-check its listings below.

The Destroy All Humans Crypto-137 Edition might be the most expensive version of a game we've seen in a long time. It's a full $100 more than the SpongeBob Squarepants: Battle for Bikini Bottom F.U.N. Edition that recently blew us away and far more expensive than the collector's editions for AAA games like Ghost of Tsushima and Cyberpunk 2077.

The Crypto-137 Edition is listed at a whopping $400 and notably includes a Crypto figurine that stands at around 23 inches tall. You'll also get a Crypto backpack that makes it look like the alien is clinging to your shoulders. Aside from that, you'll get everything included with the Collector's edition. Here's a full list of everything:

Right now, we're only seeing this version available to purchase at Amazon, but it won't be in stock until September 2. 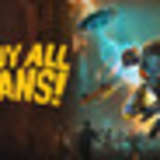