THQ Nordic confirms rumors and announces a remake of the 2006 game, Reprobed, where you play as an alien hellbent on killing all humans.

Leaked by PlayStation earlier this week, THQ Nordic has now officially announced Destroy All Humans 2: Reprobed, a remake of the 2006 game in which you play as an alien trying to kill every human in sight, again. Reprobed is in development at Black Forest Games, the German studio behind the 2020 remake of the original Destroy All Humans.

Reprobed is set in the same time period and city--1960s in a fictional San Francisco called Bay City--along with other locations inspired by places like London, the Soviet Union, and Tokyo. You will even travel to the Moon because this is Destroy All Humans and it's wacky like that.

For the remake, the developers at Black Forest said during a presentation that, in addition to better-looking graphics and performance--the destruction system is improved upon. Specifically, damaged buildings will now catch fire and go up in flames before they come crashing down.

There are also new weapons in the remake--but don't worry, the probe gun from the original game is indeed making a comeback. One of the new weapons shoots discs, and another, the burrow beast, summons a worm from underground in a nod toward the Kevin Bacon movie Tremors. The Dislocator weapon from the original game is improved, too, and should now be easier to wield and more powerful.

An ability that puts people into a zen-like hippy trance is coming back too, and it's less overpowered than in the original game, the developers said. Cutscenes are improved in the remake, as well, now featuring more lifelike motion-capture.

Reprobed is playable solo or in split-screen co-op, though Black Forest wasn't ready to show off the split-screen mode at this stage.

Reprobed is in development a new-gen console exclusive and it will also come to PC. The game is targeted for release in 2022. For more, check out the announcement trailer above. 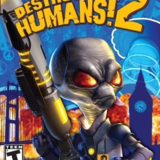