Infogrames sends us a video trailer of its upcoming real-time strategy game, which is set in the Wild West.

Infogrames Entertainment sent us a short video trailer of its upcoming real-time strategy game, Desperados: Wanted Dead or Alive. The trailer gives a general view of the game, with an introduction to the main characters, some gameplay footage, and a taste of the game's music. Desperados is a squad-based strategy game in which players lead a group of six characters on a hunt for a notorious outlaw. The game is set in the Wild West during the Civil War era. It will feature more than 35 different civilian and animal units, as well as more than 25 different enemies.

Desperados is scheduled for release in May. For more information, take a look at our previous coverage of the game. 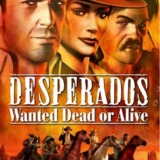