The tactical Western-themed stealth game is launching this summer on PS4, Xbox One, and PC.

Developer Mimimi Games has announced that Desperados III, the latest game in the Western-themed tactical stealth series, is launching on June 16 for PlayStation 4, Xbox One, and PC.

Desperados III is the long-awaited prequel to 2001's Desperados: Wanted Dead or Alive, which was developed by the now-defunct Spellbound Entertainment. Mimimi Games has since taken over the reins of the series; the German studio is most well known for developing the excellent Shadow Tactics: Blades of the Shogun in 2016. Desperados III sees protagonist John Cooper return in another story-driven real-time tactical stealth game.

You play as five unique characters, each with their own particular set of skills--from traditional gunslinging to something more supernatural like voodoo magic. The story takes you on a journey through classic Wild West locales like frontier towns, sprawling modern cities, swamps, and more, and the game's sandbox maps encourage creativity from all your murdering. The new showdown ability--pulled from Shadow Tactics and slightly tweaked--lets you pause the game and carefully plan ambushes where your whole gang is involved, while neutral areas allow for some Hitman-style social stealth. 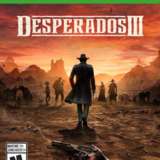