The German and British armies once again battle in the desert in this upcoming real-time tactical combat game.

The epic tug-of-war struggle in North Africa between Britain's famed 7th Armoured Division and Rommel's Afrika Korps serves as the basis for the aptly named Desert Rats vs. Afrika Korps, an upcoming real-time tactical combat game from European developer Digital Reality. Not to be confused with a wargame, Desert Rats takes the real-time strategy game formula and strips out all of the resource mining and production aspects of the game. What's left is a tactical game with lots of historical authenticity and an emphasis on desert battles.

One of the most immediately appealing aspects of Desert Rats is simply how it looks. It's a beautiful-looking game that has loads of detail on all the vehicles and units. Tanks bounce around on their suspensions, sandstorms blow dust across the screen, and the sand is almost blindingly bright during the daytime. More impressively, the game is capable of rendering large numbers of men and tanks, so it really gives you a sense of the mass and scale of those World War II battles. The terrain also seems alive with interaction. Furthermore, all vehicles can be controlled, and the entire environment is fully destructible. You can blow up buildings, trample barbed-wire fences, knock down palm trees, and run over infantrymen with your tanks.

Controlling units is simple, since Desert Rats uses the same control scheme found in most real-time strategy games. You can also pause the game to issue orders, which is always helpful in the heat and chaos of battle. In place of resource gathering and unit production, the game features a point-based system not unlike that found in the Close Combat series or in other tactical strategy games, like the Sudden Strike series. You start each mission with a set number of points with which you can requisition units. Obviously, more powerful units, like tanks, cost you more points than less powerful infantry units. To make things easy, the game automatically assigns you a default army--composed of various units--at the beginning of each mission, though you still have the option of choosing each unit for yourself. You can earn extra points, as well as access to special units, by accomplishing secondary objectives in the game or by uncovering a hidden objective during a mission.

There are more than 70 historically accurate units in the game, including Cromwell and Stuart tanks, machine-gun troops armed with MP40s, trucks, motorcycles, and artillery pieces. Units can interact with each other in a variety of ways. Infantry can board and operate vehicles. If a single infantryman jumps into a tank, he can drive around, but his visibility and rate of fire are reduced. Get a full crew of three on board, and the tank is a much more effective weapon. Troops can also barricade themselves in buildings for protection, while vehicles can dig into defensive positions. You can order units to aim at certain portions of vehicles, which is essential if you want to disable an enemy vehicle instead of knocking it out completely. Once its disabled, you can capture and repair the vehicle, and then you can use it against the enemy. Your commander unit will also bestow special bonuses to nearby allies as a result of his leadership ability.

The game will have 20 missions separated into two campaigns--one for the Allies and one for the Axis Powers. Again, in keeping with the historical flavor of the game, all missions are loosely based on or inspired by actual battles. There's also a single-player story mode that promises to hearken back to classic World War II movies like Kelly's Heroes. Finally, Desert Rats has some of the best music that we've heard in a World War II game in some time. The developer plans to support up to four players in multiplay. We're told that there will be a capture-the-flag mode, as well as a base-versus-base mode called Tobruk to El Alamein, which refers to the two pivotal battles of the North African campaign.

European copublisher Monte Cristo says that Desert Rats signals a new chapter for the company in terms of quality. From what we've seen, it looks like they're on the right track. Desert Rats is very far along in its development and is expected to ship this March. 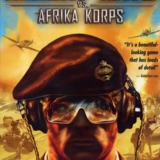