TOKYO--Fans of the Densha de GO! train simulation series will soon be able to play the game on their PSPs while riding the rails themselves. Game publisher Ongakukan announced today that Mobile Train Simulator + Densha de GO! Tokyo Express Edition for the PSP will hit stores on February 17. The game will be priced at 4,800 yen ($46).

Similar to the PlayStation 2 game of the same name, Mobile Train Simulator + Densha de GO! Tokyo Express Edition for the PSP puts players in charge of express trains zooming through Tokyo. The game offers two modes. In the easy-to-use Densha de GO! mode, players can control trains without even knowing how to drive a vehicle. The train simulator mode ups the difficulty by letting players conduct trains using the game's realistic controls. 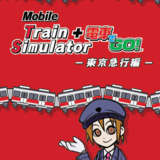