The 90s classic Zombies Ate My Neighbors is getting a spiritual successor. The newly-announced Demons Ate My Neighbors is a rougelike twin-stick shooter, and its coming to PC and Switch in late 2021 from developer Tuned-Out Games and HumaNature Studios (Toejam and Earl: Back in the Groove).

The game, which will be set in 1991, is not an official sequel to the original game it takes inspiration from. It's about April and Joey, two heroes who need to save their suburb of Fairweather Valley from the demons unleashed by a cursed VHS tape.

The game will feature local co-op, and you'll need to squirt the bad guys with a water gun to keep them at bay. You can check it out in the trailer below.

The game will feature procedurally-generated levels, but each character will be able to use their "RadWatch" radar to seek out the survivors they need to rescue in each level, as well as the demons that need to be killed.

A Kickstarter will launch on September 1 for the game, and while the PC and Switch versions are definitely happening, the $175,000 goal will be used for Xbox Series X and PS5 versions, if it's reached. More levels and monsters will be added if the campaign is successful, too.

The game is due to release in autumn 2021, so it's a while away yet. If you're interested, keep an eye out for the Kickstarter next month. 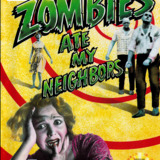