As you would expect, Demolition Racer plays a lot like the PlayStation version. The emphasis is still on racing. You'll want to place first, but you'll want to smash into as many cars and cause as much damage as you can along the way. No Exit uses the same points system to determine final placement as the PlayStation version does - the rank you place will determine the multiplier of your damage points, with the final result determining your final rank. You won't necessarily have to place first as long as you wreck enough cars, but it always helps to have a high racing rank.

The action in Demolition Racer: No Exit is as crazy as ever. With up to 16 cars on the track at once, No Exit has plenty of potential for huge chain collisions and stack-ups. Along with the traditional rear-ends and fender benders, No Exit has two brand-new collision types, both of which will instantly disable your opponent's car and give you a massive point bonus. T-Bone another car by hitting its side panel at a 90 degree angle, or give him Death From Above by landing on him after a jump. You can also force other cars into areas chock-full of explosives, known as kill zones, and use the game's power-ups to enhance your car-wrecking experience.

The graphics in No Exit are extremely nice. All the cars and tracks look very clean, and the cars get damaged in a realistic manner. Hoods fly off, rear windshields crack, and panels get dented in, all helping you determine how much damage you've taken. The background tracks all feature tons of different types of terrain, with plenty of ambient visual effects to keep the attentive happy. The soundtrack is filled with pounding techno, and crashing and twisting steel noises pepper the throaty engine growls that populate the sound-effects department.

There are plenty of modes to keep you happy. Along with the standard racing modes (which will have more than 20 tracks when the game ships), there are several variations of the traditional "bowl" modes, which are more of your standard demolition-derby fare. There's no room to hide when 16 cars fly at each other in an arena no larger than 50 yards.

While Demolition Racer: No Exit certainly isn't a new concept, it's still a great deal of fun to smash cars into each other, and the Dreamcast version looks really good. This game has a lot of potential for racing fans but may be a bit too bland for people who don't slow down for accidents on the freeway. 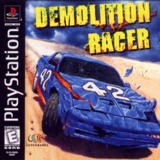