"Thanks to the raw power of both Xbox One and PlayStation 4, we will be able to unleash our undistilled vision of a next-generation demolition racing game on consoles."

Bugbear Entertainment today announced that its destruction-themed car game Wreckfest is coming to PlayStation 4 and Xbox One, while the studio has unveiled a new project that sounds awesome.

In a statement, game director Janne Alanenpää said Wreckfest for consoles will debut through "early access." This is likely a reference to the Xbox One's Game Preview program, which lets users buy games that are still in development. However, Sony does not have a similar program for PS4, which is keeping another game, Ark: Survival Evolved, from coming to PS4. GameSpot has followed up with Bugbear in an attempt to get more details. The PC version of Wreckfest remains in Early Access on Steam.

Whatever the case, Alanenpää is excited to bring Wreckfest to consoles. "Thanks to the raw power of both Xbox One and PlayStation 4, we will be able to unleash our undistilled vision of a next-generation demolition racing game on consoles as well and expand our audience considerably," Alanenpää explained.

You can preorder Wreckfest for PS4 and Xbox One right now through the game's website. Doing so allows you to become "among the first" to play on console, though no other details were provided.

Bugbear's other big announcement today was the new game Stuntfest. This is described by the developer as a "wacky vehicle-based physics playgound" where you can make your own stunts with an editor tool. In addition to cars, you can drive things like mobility scooters and shopping carts. The studio has teamed up with an unspecified "investing partner" for this project.

Stuntfest will be released on PC through Steam Early Access in October 2016; the full game is due out sometime in 2017. You can preorder the game now for $15, which Bugbear notes is a limited-time price.

To celebrate today's announcements, Bugbear launched a "late summer" sale on its website, where it's offering discounts of up to 50 percent on Wreckfest and Stuntfest. These deals are good through Sunday, September 4. 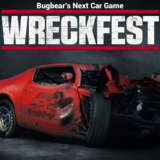