Ghost Ship Games dwarf-focused, co-op first-person shooter will be releasing for Xbox One and PC on May 13.

Ghost Ship Games has released a new trailer for Deep Rock Galactic, which announces that the Steam Early Access game will officially release for both Xbox One and PC on May 13. The co-op first-person shooter will be available for $30 USD / €30 / £25.

"When we started developing Deep Rock Galactic four years ago, none of us at Ghost Ship Games had imagined the game as it is today," Ghost Ship Games CEO Søren Lundgaard said. "While many of the core features have evolved and work as we hoped, there are also entire sections of the game that we didn't dream of, and that is largely due to our community."

First entering Steam Early Access in 2018, Deep Rock Galactic sees you and up to three friends team-up as a group of dwarven miners. There are four classes of dwarf, and your team is encouraged to work together in order to explore procedural-generated caves and reach your goal. Mistakes can see you accidentally encountering hostile aliens, which your team will then need to defeat.

At launch, Deep Rock Galactic will have two cosmetic DLC packs available for purchase--they'll include armor sets and weapon skins. 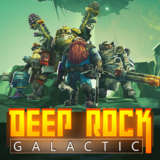