We explore the mysteries of human memory through the role-playing action of Atlus' Deep Labyrinth.

Do you remember what you had for lunch a month ago today? How about every conversation you had last month? According to Deep Labyrinth, every memory you've ever forgotten has been transported to a realm filled with monsters, managed by talking mice in weird outfits, and eventually erased through some process overseen by a giant pink elephant. That is, if those memories aren't outright destroyed by a mysterious invisible woman first. Still with us so far? Deep Labyrinth combines heavily stylus-based combat with a bizarre storyline, and we recently got to spend some time delving into its world and all the quirks therein in an English-language version of the game.

The game starts out with a boy named Shawn, who's on a car ride with his parents and Ace, his faithful husky. Things in the car seem a bit awkward between the parents, and Shawn is trying to figure out why when one of the automobile's tires goes out. It just so happens they've had this breakdown near a dark and gloomy-looking house, and when Ace runs off barking toward the building, the parents move to chase him down. They're gone for some time, and Shawn finally moves to investigate, creaking open the door to the house. Here's where it stops pulling from horror movie stock, because instead of finding his family, his dog, or a pile of zombies, he encounters a giant portal that rapidly sucks him inside. He awakens in some exotic garden, where the pink elephant-man mentioned previously descends from the sky and expresses incredulity at the human for being in what should be the god's realm.

Apparently, the family has somehow gotten transported to a place called Vimana, or the "airship of the gods," a place where human memories and emotions go to be processed and removed, lest they consume the world. Mr. Elephantguy announces that he has no time for Shawn and warns him that guards will probably arrive soon--instead, you end up meeting a purple platypus named Moccho, who saves your progress, as well as a whole slew of mice strewn about the countryside. The mice are apparently cogs in this whole memory-processing machine (middle management, really), and they have a lot of helpful advice to dispense about gameplay and other events, even if they consider Shawn bombastically stupid for not knowing these things from the start.

You'll explore the world by using the directional pad to move around and the stylus/touch screen to interact with objects--none of the other buttons come into play at all. The gameplay is all in first-person view, with a set of icons along the right side of the touch screen to govern various combat actions. The sword icon brings up your sword arm and lets you engage monsters with melee strikes. You can touch foes with your stylus to lock onto them, though typically you'll have no problem hitting those that are in range; by moving the stylus in swipes along the screen, you can produce a number of different sword-strokes. Melee combat is quite easy to pick up, and we were cutting through butterflies, armored knights, and wraiths in no time at all.

The next icon lets you use magic spells, and when you tap it, it overlays a grid on your screen. Each spell is denoted by a particular symbol, called a "kirie," that you'll locate on tablets scattered throughout the game world. To cast a spell, you'll trace the kirie on the grid, and the spell will then consume MP and cast. There are a number of spells in the game that we've encountered so far--offensive magic spells that cast ice, healing spells, a spell that lets you imbue your sword with magical energies, another spell that lets you absorb a certain type of magical damage, and so on. If you forget the gestures attached to a kirie, you can reference them in a spell list in the game's menu. Offensive spells let you kill monsters from huge distances, but they also come into play for puzzles in the game. Certain doors require you to know certain kirie to open them, so you'll need to first find and learn the spell and then trace the kirie on the door to proceed.

The third icon will bring up your shield for as long as you hold the stylus over it, should you need to absorb an attack. There is also a "pocket" icon below that brings up a small item menu at the bottom of the screen. You can move items from your inventory into your pocket, and anything you have in the pocket you'll be able to access and use during combat. Most often we kept this filled with health potions and magic potions in case of emergencies, and it worked out quite nicely. As you move through the game's many rooms and other areas, you'll come across innumerable treasure chests that contain not only items, but also swords and armor, as well as shields that you can equip for increased protection. Having a set of armor matters, according to one mouse, so you'll apparently get some kind of bonus for equipping, say, steel armor with a steel sword and a steel shield. Another interesting thing about your weapon is that it increases in level as you use it, so the more monsters you hack down with it, the stronger and more effective it becomes.

The world starts off with green fields and scattered temple rooms and then moves into the whole labyrinth part, where you'll roam a mazelike dungeon searching for your family. The game's 3D isn't highly sophisticated, but it allows for some interesting-looking monsters and bosses, and you can move quite briskly around the world and dungeons, cutting through beasts and scarfing up treasures. When you encounter larger boss characters or otherwise imposing personages, sometimes they'll take up both the bottom and top screens in intro sequences. It gives you a disconcerting but neat feeling when you run into a dragon, and as he stands you'll suddenly find yourself staring at his feet until you glance up at the top screen, where he's glaring balefully down at you--it really does give the impression that you're "looking up" at some of these creatures. Music in the game is lighthearted and lilting in outdoor areas and while talking to creatures, and it switches to a darker and richer theme in the labyrinth itself and during boss battles. It sounds really good, and it should--composer Yasunori Mitsuda of both the Chrono series and Xenogears/Xenosaga is responsible for the game's music.

While it's got a very simple look to it, we were still drawn in by Deep Labyrinth's crazy premise and intuitive gameplay, as well as how it seems to capture the essence of a good-old-fashioned first-person dungeon crawl. While the game's not scheduled to arrive in North America until later this summer, we're definitely going to be keeping our eyes on this one. For the latest updates, keep watching this gamespace--and don't forget, or the pink elephant's going to get involved. You don't want that, do you? 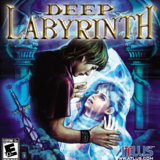