Death Jr. and the Science Fair of Doom Hands-On

Death Jr. and his troupe of goofily ghoulish cohorts are bringing their comically morbid brand of action to the Nintendo DS. Find out how the game plays in our first hands-on experience with the game.

The PlayStation Portable has already seen two different games featuring the bubble-headed son-of-a reaper known as Death Jr., so it only seems fair that Nintendo DS owners should finally get in on the action. Konami is bringing the unique brand of morbid humor and blend of action and platforming to the Nintendo DS with its upcoming game, Death Jr. and the Science Fair of Doom. We played the game at a recent Konami press event and it looks like the game stays true to the familiar Death Jr. formula while introducing a few twists unique to the DS.

As the subtitle suggests, the game is about a science fair gone horribly awry. While conducting their science fair projects, Death Jr. and his friends accidentally unleash a horribly mutated bunny-type creature known as a Moloch. The friends have to track down and subdue the evil Moloch before Death Jr.'s dad finds out what they've done. To make matters worse, Jr.'s friend Pandora gets killed at the beginning of the game. However, as we soon found out that having a ghost for a friend can come in handy.

The game takes place in the school, with a central hub and different rooms and science fair exhibits to explore. We jumped and slashed our way through the twisted cafeteria in our time with the game. Playing as Death Jr. we jumped across platforms, triggered switches to access new areas, slashed at enemies with our scythe, and collected souls from the enemies we defeated. These souls can be used when you take control of Pandora--or, rather, Pandora's spirit.

While the spirit world emphasizes platforming and puzzle solving, the living world involves a lot more combat. Death Jr. can slash enemies with his scythe and perform different combinations by stringing attacks together. By successfully attacking enemies and avoiding damage, Death Jr.'s confidence will increase, as indicated by a number of skulls at the bottom of the screen. When his confidence is high, you can hold down on the D pad while performing combos, and Death Jr. will perform a combo finishing move that will inflict heavy damage on the enemies. We found it easiest to attack by simply pressing the X button, but if you like you can also slash at the touch screen to perform attacks.

In addition to the single-player game there are also two multiplayer minigames that you can play over a local network connection. Currently, though, the details are scarce on what these minigames actually involve.

The uniquely bizarre and distorted visuals of Death Jr. translate well to the Nintendo DS. The characters all look detailed and cute in a morbid sort of way, and they animate smoothly. The backgrounds look like something taken straight out of a Tim Burton film, with twisted hallways and rooms that feel both familiar and demented at the same time. The game is mostly 3D, with a fixed camera angle depending on the area you're in. In some areas you get an isometric perspective on the action while in others the camera switches to a side-view. In those cases the game plays just like a 2D platformer. The transitions between different areas are handled well, so it's not too jarring when you switch from a close top-down view to a pulled-back side-view.

Death Jr. and the Science Fair of Doom is shaping up to be a quirky blend of action and platforming with a unique sense of humor and style. You don't have to wait very long to see how it turns out though, because the game is scheduled for release this spring. Until then, check out the newly posted screenshots and be sure to stay tuned to the gamespace for further details as they become available 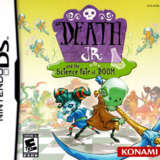 Death Jr. and the Science Fair of Doom
Follow

View Comments (9)
Death Jr. and the Science Fair of Doom