We get spooked just in time for Halloween with the co-op multiplayer mode in Death Jr. 2: Root of Evil on the PlayStation Portable.

What's better than getting a good scare? Sharing that fright with a friend, of course. That's exactly what you can do in the upcoming Death Jr. 2: Root of Evil for the PlayStation Portable. OK, so if you've played the original Death Jr., you know that it's really not that scary. It's actually a lot funnier than scary. But still, it has the spooky theme down pat, and it's coming out just in time for Halloween.

If you've been following our previous coverage of the game, Death Jr. 2 isn't exactly a sequel but is a completely new story set in the same universe. This time around, you can play as both DJ and his partner in crime, Pandora. Aside from the newly playable Pandora, plenty of other updates to the action-platforming formula have been added for this release. The camera has been revamped to make it easier to adjust your perspective on the fly; the characters all talk and interact more than before, providing depth to the various personalities; and there are more weapons, levels, and enemies than in the previous game.

That's all well and good, but perhaps the biggest addition is the ad hoc multiplayer mode. You can link up with a friend to play through the entire game cooperatively--one player controls DJ and the other player controls Pandora. Either player can load up a saved co-op game and then invite another player to join them, even if they're not the same player who played through the earlier stages of the game with them. The only caveat is that both players have to have a copy of the game in order to play.

We played through the Llama Farm level of the game as DJ, while our partner played as Pandora. The level took place at a farm with all kinds of creepy enemies. For example, we had to run around and take out menacing chickens, using combinations of ranged attacks and weapon combos. There's an onscreen indicator that shows you where your partner is, so you don't have to worry about being separated for too long. Because the levels are exactly the same in the single-player game as they are in the multiplayer game, there aren't any areas that require you to cooperate with the other player to progress. Instead, the multiplayer game just means that you have to kill fewer enemies because you can team up on the mobs of monsters. It's also worth noting that we didn't experience any lag whatsoever when playing via the PSP's Wi-Fi connection.

Death Jr. 2 looks charming, thanks to the cartoonish character and level designs, as well as the slightly macabre sense of humor. The characters all have several attacks, and there are plenty of different weapon effects to lend the game a slick sense of style and visual appeal. The frame rate held up well as we played, even when the screen was full of enemies. We were also treated to a lengthy and impressive cutscene that featured Death itself. The scene was funny, and we're excited to see more as the story unfolds.

This Halloween, Death Jr. 2: Root of Evil will be haunting PSPs, so be sure to check back soon for our full review. Until then, you can bide your time by taking a look at the recently posted screenshots from the game. 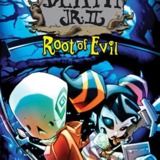