For a game about the undead, Dead Rush didn't live very long. Just over two months after Activision unveiled the hybrid of survival horror and driving action at the 2004 E3, it has summarily canceled the project. "We gave it an opportunity, but it didn't meet our standards as a big proposition," said Activision Publishing CEO Ron Doornick in a post-earnings report conference call today.

In development at Spider-Man 2 studio Treyarch, Dead Rush was to be released on the Xbox, PlayStation 2, and GameCube. It was to follow an amnesiac who wakes up in a coastal town racked by earthquakes and overrun with zombies. To learn more about what might have been, check out GameSpot's first--and last--look at the game. The game's trailer runs in the window above. 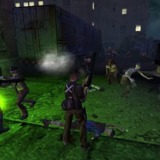