Sales of Tecmo's fighter for the Xbox reach the 1 million mark.

1 Comments
Tecmo has announced that its Xbox fighting game Dead or Alive 3 has sold approximately 1 million units worldwide. Dead or Alive 3 was a launch title for the Xbox in North America, Japan, and Europe. A booster disc was recently released for the North American version of the game that lets players add new costumes to the characters in the game, and it also contains the CG introduction that was included in the Japanese and European versions of Dead or Alive 3. 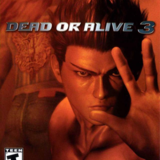