Infogrames announces an Old West-themed shooter for the Xbox. First screenshots inside.

Infogrames has announced a new first-person shooter for the Xbox, called Dead Man's Hand. The game has an Old West theme, is powered by Epic Games' Unreal graphics engine, and will feature online multiplayer through Xbox Live. Developed by Human Head Studios, known for creating Rune on the PC, Dead Man's Hand is scheduled to be published this fall under Infogrames' Atari label and will be an exclusive title for the Xbox.

The single-player component of Dead Man's Hand will put players in the role of a gunslinger named El Tejon, who is part of a gang called The Nine. After being betrayed by the gang, El Tejon vows to get revenge on his former mates. The story plays out over the panorama of the Old West, using characteristic backdrops for the game's campaign, ranging from deserts and towns of the southwestern United States, to mountains and mines in the northwest, to riverboats and cities of the Midwest. The game's campaign stretches out over 20 missions and includes bar fights, showdowns, stagecoach chases, and a shootout on a moving train. Players will be able to fire weapons while riding a galloping horse and use nine different guns in the game modeled after real-world pistols, shotguns, and rifles used in the Old West.

Dead Man's Hand will also feature a special "legend" score that accumulates as the player makes his way through the levels. As the player's legend score builds up, he'll be able to execute special moves such as trick shots. A short poker match is also played out before each mission. Winning hands will earn players additional health, ammo, or legend points, and players will have the option of gambling initial earnings for heftier bonuses.

The game includes online multiplayer capability over Xbox Live, as well as split-screen multiplayer modes, both competitive and cooperative. We'll post more information on Dead Man's Hand as it becomes available. For now, enjoy the first screenshots of the game. 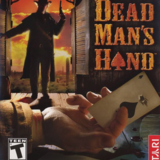