Valve's remake of the classic Half-Life WWII mod will be available September 26 via Steam.

Valve Software took longer than expected to release Half-Life 2, the sequel to its groundbreaking shooter. However, the developer has fared better with remakes, releasing new versions of the original Half-Life and Counter-Strike based on HL2's Source game engine.

Today, another Source-powered remake of a classic Valve game was given a firm date for release. The studio has announced that Day of Defeat: Source, the revamped version of the classic Half-Life mod, will be available on September 26 for the price of $19.95. Purchasers of the Half-Life 2 Silver or Gold packages will receive a request to preload the game today and will receive free access to the game when it goes online.

"Day of Defeat has quietly been one of the most played online action games for the past three years," said Gabe Newell, president and founder of Valve. "Day of Defeat: Source represents a major leap forward in both graphics and gameplay, and pushes the Source engine harder than any other Source project."

Being a remake, DOD: Source is essentially the same game as the original, which let teams of players face off as squads of either Allied (British or American) or Axis (German) troops on World War II-inspired maps. The new version will feature the same maps, updated with snazzy new Source-powered graphics, HDR lighting, and new player, weapon, and world models. DOD: Source will also feature HL2-style realistic physics, including rag dolls.

However, unlike Counter-Strike: Source, which will be available as a stand-alone boxed product in stores later this month, Day of Defeat: Source will only be available online--for the time being. PC Gamers wishing to download the game will have to log onto Valve's Steam service at www.steampowered.com. 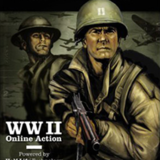