Australia is well known for having a strict games rating regime, a fact that was demonstrated yet again today with the banning of another title. This time around, violent sci-fi shooter Dark Sector was refused classification by Australia's Office of Film and Literature Classification (OFLC), making it illegal to sell the game down under.

Dark Sector, which was due out for the PS3 and Xbox 360 in Australia at the end of March, is a third-person action game which sees players taking the role of a virus-infected black ops agent endowed with superhuman abilities. In Australia, the highest rating available to a game is MA15+, as opposed to other forms of media such as film or DVDs which have an R18+ classification (the R rating prohibits sales to anyone under the age of 18). Games which feature content deemed unsuitable for a MA15+ rating are refused classification and are effectively banned from sale.

Adam Zweck, sales and product manager for AFA Interactive (the local distributors of the game), told GameSpot AU that the OFLC banned Dark Sector due to its high-impact violence, particularly the finishing moves the game's main character can perform on various enemies.

"Obviously we're disappointed in it [the decision]," Zweck said. "We feel there is justification for an appeal. However, we're exploring several avenues at the moment to see what we can do to get the game on Australian shelves."

UPDATE: The OFLC has sent through its official ruling to GameSpot AU, which says that Dark Sector "contains violence that is high in impact and is therefore unsuitable for persons aged under 18 years to play."

"The finishing moves and most violent game play includes decapitation, dismemberment of limbs accompanied by large blood spurts, neck breaking spurts, neck breaking twists and exploded bodies with post-action twitching body parts. These moves are relatively easy to accomplish and once the player has mastered the moves and is able to get close to his foes, these violent moves can be executed," the OFLC's ruling said.

"Successfully shooting an opponent results in the depiction of blood spray. When Hayden cuts off his opponent's limb with the glaive, large amounts of blood spray forth from the stump and the injured person screams in agony which increases the impact." 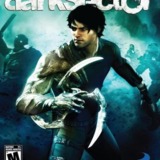 There are 316 comments about this story
Load Comments (316)