GarageGames announces that an open beta test for its upcoming mecha action game is now underway.

"Overall we've been very happy with the response we've gotten from our beta players to Lore," said Adrian Wright, president of Max Gaming Technologies. "Once they understand this is an FPS with early mechanized assault vehicles, even the most hardcore mecha-sim players enjoy the melee multiplayer action."

"I have been playing, and modding, Starsiege and Tribes for five years in order to do my part to keep the games alive," commented Stephen Tungate, a beta tester on Dark Horizons: Lore. "I never thought a game would come along with the features of both. Dark Horizons: Lore will be the game to rekindle the fire of the mecha gaming community."

Anyone interested in downloading the game and giving feedback to the developers can do so at the game's official Web site, using the ignition code RAYR-R46W-KZ4Z-Z6CW to play the game until the end of the testing period. For more information on Dark Horizons: Lore, check out our previous coverage of the game. 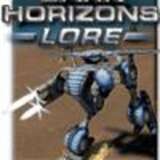