More than two years after Encore Software announced it would be publishing an action adventure game based on the Marvel Comics superhero Daredevil, the company has officially closed the books on the project.

News of the cancellation came from an earnings report filed last week from the Navarre Corporation, Encore's parent company. In the report, Eric Paulson, Chairman and CEO of the Navarre Corporation, stated, "Included in our results is our management decision to shut down the development of Encore's video game console projects, which primarily consisted of the Daredevil video game project. As a result, the Company wrote off $4.3 million of development costs during the quarter and a total of $5.6 million for the fiscal year. These charges are reflected as a reduction in our gross margin. We have refocused Encore on its core competencies of software publishing."

Slated for release on the Xbox and PlayStation 2, Daredevil was to have been a third-person action game that let you take control of Marvel's sightless, crimson-clad superhero. Though the game was announced back in early 2002, no playable version of the game ever surfaced during subsequent E3s or company presentations. A Game Boy Advance Daredevil game, developed by a non-Encore studio, was released concurrently with the motion picture early last year. 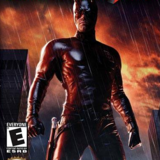