The icon arcade dance game is back again, and we got to check it out on the E3 2009 show floor.

After numerous iterations, Dance Dance Revolution is back for yet another year. The biggest change to the series this time is a brand-new eight-way dance mat peripheral for the PlayStation 3. There's also good news for existing Xbox 360 DDR fans: their dance mats will also work in eight directions thanks to the existing pad's nine sensors. Like with other dance/rhythm games, the additional buttons will come into play only at the harder difficulty levels, so novices won't be overwhelmed at the beginning. For DDR pros, however, the addition of four more pads will certainly up the ante this year. Wii Fit owners will also be pleased to know that DDR is compatible with the Wii Balance Board.

While the eight-way dance pad will ultimately make the game more challenging, there are two new modes for casual fans: School mode and Relax mode. School mode is purely for practice, with no scoring whatsoever. Relax mode has some scoring, but the difficulty is described as "ultra easy," making the game more accessible to new or less coordinated dancers. Eight-way dancing will be limited to the new Octo-move mode, so purists can rest easy that the core gameplay remains unaffected.

The latest instalment boasts 30 full master tracks, including related video clips and artwork. An additional 20 songs were created by the Bemani development team, so there's sure to be a healthy dollop of cheesy j-pop along for the ride. We were told by a Konami rep that, for the first time, Latin America will also get a range of songs. 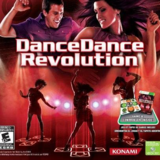