Cygni Is A Retro-Inspired Shooter With A Modern Sheen

Shoot-'em-up games aren't as prolific now as they were in the '90s, but developer KeelWorks' new game Cygni: All Guns Blazing looks extremely impressive. Featured in a gameplay trailer during the Future Games Show, the bullet hell game mixes Pixar-style visuals--from a former Pixar artist, no less--with fast movement and dangerous enemies.

Cygni is technically a vertical shooter, but you have freedom of movement and can quickly run circles around enemies as you blast away at their shields and avoid projectiles. The trailer featured a bug-like robot enemy that fired both lasers and projectiles at the same time, and it will take extreme coordination to avoid getting hit. For fans of older retro shooters, it looks like it will be second nature, but it will make use of a twin-stick control scheme like the similarly-futuristic Nex Machina.

Right now, Cygni is planning to release on PC and Mac. However, the game's developers are also hoping to release it on next-generation systems. You can wishlist the game now on its Steam page. 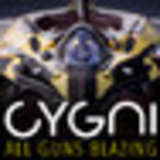 View Comments (1)
CYGNI: All Guns Blazing
PC
Play For All