We take another tussle with the big ape at CTIA.

SAN FRANCISCO--We're happy to report that King Kong The Official Mobile Game of the Movie (yes, that's the full title) is just about ready for his grand mobile debut. The development of this side-scrolling action adventure game has been under close wraps (we were only able to play a single level at E3), but Gameloft let us go hands-on again with a nearly complete version of the game at CTIA.

This time around, we tried our hand at Level 11--Kong's climactic journey to the top of the Empire State Building. The top-notch character animation doesn't seem to have changed much, as Kong still lopes along with realistic simian grace, and he shakes the ground when he leaps. However, this was the first extended climbing sequence we saw the big gorilla perform.

The trip up the building wasn't easy. Spotlights roamed all over the outside of the building, and coming into contact with them produced an artillery explosion that damaged Kong badly. Kong is huge, but he isn't invincible. As a result, long falls will kill him just as surely as extended exposure to fire or taking too many bullets. After we made it past the spotlight sequence, fires started burning out of control across the surface of the Empire State Building, and biplanes began to fly toward us from the sides of the screen to perform strafing runs. We had to swat madly at the planes while trying to keep our ape from bursting into flames at the same time.

All in all, King Kong looks ready to pound the mobile action adventure genre into submission, just as he looks to pound unfortunate dinosaurs in the movie. We're looking forward to the game's release in November. 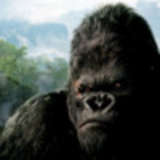 King Kong: The Official Mobile Game of the Movie
Follow