Crysis developer said to have new "big budget" game in development for consoles and PC.

Crytek already has a full slate, what with work ongoing on the Kinect-enabled title Ryse for Microsoft, THQ's Homefront 2, and its first iOS title, Fibble - Flick 'n' Roll. However, the German game company has one more product in the pipeline as well, and it's one that it expects to begin talking about next month.

Speaking to CVG, Crytek general manager Nick Button-Brown confirmed that the studio plans to announce a new "big budget" game for consoles and PCs in April.

"You know about Homefront, you know about Ryse," Button-Brown said. "We are working on another project… [laughs] all three of which are looking really good…The other project looks absolutely fantastic--I mean, genuinely the best of that kind of project we've ever done."

The obvious assumption would be that the new project will be a new installment in the Crysis first-person shooter franchise. Following on from 2007's highly regarded original, Crysis 2 scored a solid critical reception upon its release in 2011.

However, the studio has also been rumored to be reviving the TimeSplitters franchise. Crytek picked up franchise creator Free Radical in 2009, after that studio went bankrupt following the unsuccessful release of Haze. Though Free Radical officially announced TimeSplitters 4 in 2007, the franchise has lain dormant since 2005's well-regarded TimeSplitters: Future Perfect. 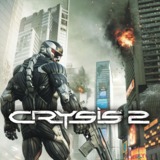