After last week's massive PlayStation Store update and its assortment of more than 100 PSP games, Sony gave itself a tough act to follow. This week's update may not have triple-digit additions to the catalog, but there are still new titles for the PlayStation 3 and PSP, another addition to the...

After last week's massive PlayStation Store update and its assortment of more than 100 PSP games, Sony gave itself a tough act to follow. This week's update may not have triple-digit additions to the catalog, but there are still new titles for the PlayStation 3 and PSP, another addition to the dual-system assortment of PSOne games, and a handful of significant downloadable add-ons for existing games. 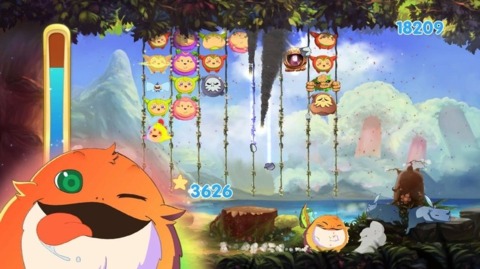 Capybara Games' puzzler Critter Crunch landed on the PS3 today, introducing the system to the adorably ravenous Biggs and its potentially unsettling regurgitation-driven gameplay. A descending field of forest critters approaches Biggs in six separate columns, and the fuzzy protagonist must use his tongue to move creatures from one column to another. By understanding where the critters are in the food chain and how they'll react to being overstuffed, players set up cascading reactions that clear out the forest and leave plenty of goodies for Biggs to collect. Critter Crunch is available for $6.99.

PSP gamers can take their basketball action on the go this week, as both EA Sports and Sony's basketball titles have arrived on the PlayStation Store. NBA 10 The Inside ($29.99) supplements its five-on-five basketball action with a variety of tangentially related minigames, including riffs on Puzzle Bobble, Risk, and Whack-a-Mole. Meanwhile, NBA Live 10 ($39.99) introduces new ways of shooting, passing, and calling plays in the game. Gamers on both the PS3 and the PSP can download the original PlayStation game Pandemonium, a 2.5D platformer from Crystal Dynamics ($5.99)

A handful of PS3 titles are also getting substantial add-ons on the PlayStation Store this week, most notably Fallout 3. PS3 owners had to wait a while, but they're finally able to get the last scraps of Fallout 3 downloadable content, as the Mothership Zeta and Point Lookout add-on packs ($9.99 each) have finally been added to the online store. Meanwhile, Little Big Planet gets its first pack of additional original music for the game ($3.99), IL-2 Sturmovik: Birds of Prey gets a mission pack ($9.99), and Tiger Woods PGA Tour 10 welcomes the addition of the 18-hole Riviera golf course ($7.50). Gamers who want to cut to the chase can unlock all the cars in Dirt 2 with the Trust Fund add-on, or access all the game's areas with the creatively named Access All Areas pack, each of which sells for $4.99.

Finally, Guitar Hero games are getting a trio of Billy Squier songs, while Rock Band's online catalog gets new songs from Alanis Morissette, Electric Six, Flobots, and the Raconteurs. Songs for both games are $1.99 each, with the Billy Squier, Electric Six, and Raconteurs cuts compiled in separate $5.49 track packs.

A full list of the new themes, wallpapers, and other content in the PlayStation Network update is available on the official PlayStation blog .