A game based on Men In Black: The Series and a new game in its Razor Freestyle Scooter franchise are headed to the Game Boy Advance.

Crave Entertainment has officially announced two games from its Game Boy Advance lineup. The company will release a game based on Men In Black: The Series and a new game under its Razor Freestyle Scooter license for the GBA. Both games will be released in Q3 2001.

"The Game Boy Advance is a tremendous step forward for handhelds and we are working to maximize that experience through our games," said Holly Newman, executive vice president of Crave Entertainment. "In bringing two of our most popular brands to the GBA, we are establishing ourselves as a strong presence on Nintendo's newest system. The depth of our gameplay on the system will break new ground when it comes to action and platform games."

Men In Black: The Series follows the exploits of agents J and K, as they travel through six levels based in such locations as New York City. There are nine weapons in the action-adventure game, including the so-called noisy cricket and grenade launcher. Razor Freestyle Scooter for the GBA is similar to the other games released under the franchise. The game features six levels filled with rails, jumps, and half-pipes. A variety of simple tricks and combos will be available in the game. 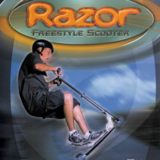