This upcoming game about camping on a haunted island comes from the developer of Road Not Taken.

Developer Spry Fox has announced Cozy Grove, a new game set on a haunted island that's giving off some serious Animal Crossing vibes. But whether or not this game has taken inspiration from Nintendo's massive series, Cozy Grove's big difference is that the island is swarming with ghosts.

The game, which is coming to Switch, PS4, Xbox One, PS5, Xbox Series X/S, and PC in the first half of 2021, casts players as a "Spirit Scout". It's up to them to seek out the ghosts of the island and help them, building up a camp and crafting new materials as you go.

You'll also be able to go fishing, as the trailer below shows.

Spry Grove's earlier games include Road Not Taken and the Alphabear series.

The game's website promises that all the spirits you meet with have unique storylines, and that the game will last for 40+ hours if you really take your time getting to know everyone.

There is, of course, one ghost in Animal Crossing: New Horizons: Wisp, who appears at night sometimes and rewards you for gathering up his spirit. It looks like the quests offered by Cozy Grove's ghosts will be more extensive, though. 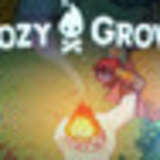