An armed terrorist group, the Army of Revelation, has hijacked the new high-speed military train, the Blue Harvest, and taken key NATO officials hostage. As the sole survivor of the terrorist attack, it's up to you to rescue the hostages and diffuse the nuclear threat.

An armed terrorist group, the Army of Revelation, has hijacked the new high-speed military train, the Blue Harvest. Traveling from Russia to Paris, the train not only contains a VIP NATO ambassador and his family but also several key NATO officials and military personnel. To make matters worse, the Army of Revelation has planted several nuclear weapons on board the Blue Harvest, and it plans on detonating them once the train reaches Paris. You play the role of a NATO soldier, Jack, the only person on board the Blue Harvest who is neither dead nor captured. It's up to you to rescue the ambassador and his family, as well as defuse the nuclear threat before it's too late.

Perhaps best described as having a Metal Gear Solid-style theme with an Under Siege 2-like storyline, Covert Ops: Nuclear Dawn is a stealthy military-combat adventure with plenty of puzzle-solving elements. You'll control Jack from the third-person perspective, using a heads-up display to determine enemy placement and other specific information. You'll have to use military tactics to negotiate your way through the interior and on the exterior of the Blue Harvest's 18 different train cars. Four different bosses stand in your way of eliminating the Army of Revelation, and they must be dealt with if you're ever to complete your objective.

As in other 3D adventures, you'll be on the lookout for information and objects that will aid you in your mission. There will be plenty of weapons in the game, and there will be useful bits of information in the form of memos, computer files, and documents. You'll come across a total of ten different weapons, from assault riles to submachine guns. As the odds are certainly not in your favor, Covert Ops: Nuclear Dawn requires you to use stealth to your advantage. Sneakiness and patience will be far superior weapons than handguns or grenade launchers.

As you travel across Europe, your actions will determine the route you take and the outcome of events. The game sports seven different endings and one bonus mode, which may or may not be presented depending on your success or failures. The game is also packed with several secret game modes, stages, and hidden areas.

The game's involving story will play itself out in more than 50 minutes of CGI cutscenes. The game's developers claim to have mimicked traditional action-movie camera tricks to make the CGI scenes more dramatic and give the game a more movielike feel to it. 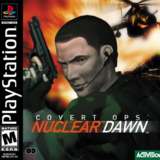