CANNES - "The goal was to make a game that would surpass Age of Empires II," says Sergiy Grytorovch, director of GSC Game World. That's a lofty goal from a Ukrainian development house that has never released a game and has only three employees. But judging from its work so far - Cossacks has been in development for only four months - this trio is either very talented or very efficient, and probably both.

Cossacks is a real-time-strategy game set in 17th and 18th century Europe and promises to offer a realistic re-creation of the political and military powers of that era. The final product will include 16 different nations, each of which will have a selection of unique units and structures, in addition to some common elements shared between all nations. The game will include 35 different buildings, multiple resource types, large (512 x 512 tile) maps, 3D terrain, and so on.

But what makes Cossacks interesting isn't this laundry list of features. Rather, it's the authentic and visually captivating manner in which it re-creates 17th century Europe. The buildings and units are breathtakingly detailed and utterly convincing, and the fact that they're modeled on real-world objects gives them a level of variety and even beauty that is all-too-often missing from games in this genre.

Cossacks is also intriguing in that it lets real military formations be assigned, and units maintain those formations in movement and in battle. Toss in support for up to 8,000 simultaneous units, and screen resolutions of up to 1,280x1,024, and you have conflicts that are not only visually realistic, but also downright vast in scope. And with the built in level editor, Cossacks will offer players the ability to re-create at will the most famous battles of the era.

GMC Game World expects that Cossacks will take another year to complete and plans to release the game in several languages (including English). Stay tuned to GameSpot for more details on this intriguing new game as they become available.

Many thanks to Oleksandr Ptytsya for his contributions to this story. 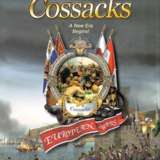