Cossacks: The Art of War Preview

The Art of War will offer new historical missions and campaigns for Cossacks: European Wars, along with substantial new gameplay features.

Released in the spring of this year, Cossacks: European Wars was a real-time strategy game that featured traditional RTS gameplay in an unusual setting: Europe in the 16th through 18th centuries. Cossacks received mixed reviews but generated enough popularity to warrant a full-blown expansion pack from its creator, Ukrainian developer GSC Game World. Cossacks: The Art of War promises to offer plenty of new material, as well as improvements to the core gameplay.

The original Cossacks offered both the unexpected and the familiar. Cossacks' familiarity surfaced in its very traditional RTS formula: Peasants tilled the land, mined gold or iron, and erected new buildings. From your buildings, you'd generate and upgrade masses of new units for conquering your enemy. Cossacks was also familiar in the way it borrowed a lot from the winning formula of the Age of Empires games. The visual style, interface, certain unit functions, and a lot of the core gameplay of Cossacks felt very familiar to anyone who'd spent time with the Age of Empires series, though the armies in Cossacks were generally much larger.

Where Cossacks stood out was in its relatively obscure subject matter. Like other RTS games before it, Cossacks drew inspiration from history. Here, though, it was history that relatively few gamers in America, at least, were likely to know much about. You got to control obscure military units such as Xebecs, Serdiuks, and Spakhs from 16 nations such as Algeria, Saxony, and Portugal. The game let you revisit conflicts you usually only read about in college history textbooks, such as the Thirty Years War and the War of the Austrian Succession.

Cossacks: The Art of War will again bring European history alive, this time adding Denmark and Bavaria to the mix of nationalities at your disposal. You'll get six new single missions that will pit varied forces against one another. For instance, the Swedes, Russians, and Poles will wage war for the resources of the Baltic states, while the Ukrainians will fight off Turkish oppressors.

You'll also get five new single-player campaigns with around five missions each. These large-scale campaigns will focus on a diverse group of nations: Algeria, Austria, Poland, Prussia, and Saxony. You'll get to play out parts of the Thirty Years War, lead a group of North African pirates to glory (or infamy), and take the role of a 17th-century Polish knight defending his homeland from greedy neighboring states and internal strife. For both the campaigns and missions, you'll get to choose from four difficulty levels.

In addition to the single-player campaigns and missions, The Art of War will offer a new multiplayer mode called "territory capture," online player rankings, and six new multiplayer historical battles. These interesting clashes are varied both geographically and temporally. You'll get to play out parts of the battles of Dunbar and Marston Moor from the English Civil War, the battles of Mook and Newport from the Dutch War of Independence, the battles of Wittstock and Breitenfeld from the Thirty Years War, and others.

Perhaps more than the new campaigns, missions, and nations, it's the new gameplay options in The Art of War that should make it appealing. The original Cossacks was known for its large scope, with hundreds and hundreds of troops fighting and peasants toiling. With the expansion pack, the game's scope will become even larger. Maps will now be up to 16 times larger than before, for instance. You'll also enjoy new units added to the already extensive mix, including the Bavarian 18th-century musketeer and the Prussian hussar. The most important new units will be the six or seven added warships, like Admiral Nelson's massive 100-cannon flagship or the French "Flora" frigate.

Each time you set up a new game, you'll have a wealth of options at your disposal, particularly with the random map skirmish mode. This will offer a host of configuration options such as land formations (like peninsulas or islands), predominant terrain (like desert or highlands), computer-controlled player difficulty, team orientations, and more. A replay feature will let you watch your battles again when the session is over.

You'll have many other options too, like starting with peasants from multiple nations, which will in turn let you create an "international" force of sorts, composed of buildings and units from different nationalities. Once you start a match, you'll get to form alliances and trade resources with computer-controlled nations.

You'll be able to start games in a "peace mode" set to last between 10 minutes and four hours. During this temporary cease-fire, you'll be able to build up your economy, structures, and units unmolested. When the shooting begins, you'll then have some really substantial forces under your control and have less need to worry about what your peasants are doing, thanks to all the resources you'll have amassed. If you'd like to skip some of the initial harvesting and building, you can just configure the game session to let you start with fortifications and armies of various sizes.

Another option found in the expansion could significantly alter and improve gameplay. In Cossacks, you were able to alter the game speed from a slow-motion crawl to a manic race, but you couldn't issue orders while the game was paused. Now you'll be able to. This should be welcome news to gamers who enjoy RTS games more for the strategy than the pressure of trying to micromanage armies with the clock always ticking.

Whether or not you take advantage of the pause feature, you'll have some important new unit orders available for more refined control of your forces. You can issue guard or patrol orders to your troops, for instance. More interestingly, you can instruct your cannons to attack any spot of ground. This option should offer opportunities for devious tactics, like bombarding areas where the enemy might want to send peasants for harvesting work. New hotkeys and improved AI should ease the burden of leading masses of troops and peasants. The latter will now head into newly completed mines automatically and start hauling up precious resources.

The Face of the 17th Century

Other than the new orders and hotkeys, The Art of War's interface doesn't appear to stray much from that of the original game. That's probably a good thing since it's modeled closely on standard RTS conventions that most gamers will be familiar with. Resource indicators line the top of the screen, a minimap resides in the lower right corner, and available unit and building options are displayed with rows of colorful icons in the lower left of the screen.

Graphically, The Art of War looks to be about on par with the original game, though you can expect a number of additions and improvements to the visuals. Cossacks is presented with an isometric 2D style with a pleasantly quaint and vaguely cartoony look. The visuals are colorful, and the animations are entertaining. Windmill vanes revolve, peasants wade into billowing fields of grain for the harvest, and drummers keep time for troops marching in formation. The game's different nations get their own unique architectural styles, so you'll see Turkish minarets or red-tile roofs on imposing Spanish barracks. The buildings, in fact, look like they'll be a visual highlight of the expansion pack, just as in the original game, thanks to their fine detail.

Approximately 200 new textures for flora and fauna alone promise to make the visuals livelier and more detailed than before. Boulders jut out of meandering rivers, with the latter turning into high waterfalls when they reach steep cliffs. Some of the forested areas truly look forested--instead of the token clumps of two or three trees you might find in some games, here you'll sometimes see whole areas covered with dense stands of trees. To create your own settings, you'll get an integrated map editor that looks like it will be easy to learn, thanks to its simple iconic interface.

There was no music in place in our beta preview copy of The Art of War, but the sound effects we did hear should bring the action to life nicely. You'll get unique audio feedback when you click on buildings--massive bells peal when you select a cathedral, and drums and trumpets sound when you select a barracks, for instance. In addition to the saber clashes and booming cannon blasts of combat, ambient sounds such as twittering birds and waves crashing on the beach should make the graphically enhanced settings seem even more appealing.

All the new material and features in The Art of War do come at a small price, though--saved games from the original Cossacks and the expansion won't be compatible. Each time you begin a session, you'll need to decide whether you want to play the original game or take advantage of the expansion's new features. Also, significantly larger system specs (like 256MB RAM) are recommended if you want to enjoy the largest maps. Tentatively scheduled for an early 2002 release, The Art of War looks like it will provide a solid expansion for an already expansive RTS. 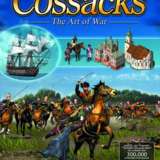