We take an up-close look at this stand-alone expansion for the historical real-time strategy sequel from GSC Game World and CDV.

SAN JOSE, Calif.--This year's Game Developers Conference in spacious San Jose, California, is under way, and we took the opportunity to visit publisher CDV for an up-close look at Cossacks II: Battle for Europe, a stand-alone expansion from developer GSC Game World and publisher CDV. Like the previous game, Cossacks II: Napoleonic Wars, Battle for Europe will take place in 19th-century Europe and will feature massive 2D battles between musketmen, cavalry, and cannons.

The expansion will feature three primary play modes: a single-player campaign inspired by historical conflicts, a strategic Battle for Europe mode reminiscent of Creative Assembly's Total War games, and a skirmish/battle mode for quick play. The campaign mode will offer four different campaigns for the nations of France, Germany, Poland, and Spain, and each campaign will offer about six different missions. In contrast, the Battle for Europe mode (available in both single-player and multiplayer games) will offer a fully turn-based, strategic component--similar to the kind found in the award-winning Total War series--to go with its real-time battles. In the strategic mode, you'll survey all of Europe as a board-game-like map (similar to Risk) divided into 24 provinces among 10 nations. You can attempt to establish diplomatic ties with your neighbors so you can barter for safe passage across their borders, make military alliances, or trade resources such as gold, food, and soldiers. Yet even though you can, if you earn a massive amount of funds, expend large sums of wealth to ally with as many as seven of your nine neighbors, you won't be able to make friends with everyone--and your final victory will have to come through force.

The skirmish/battle mode (also available in both single-player and multiplayer games) offers quick one-off skirmishes on maps that are either randomly generated or based on real-life historical battles. In randomly generated skirmishes, you'll start the game with a small squad of peasants, who can gather resources such as stone and wood, as well as build soldier-producing barracks and cavalry-producing stables. To fill your coffers with gold, you'll need to bring your armies to conquer settlements, which may be guarded by neutral militia--after which, settlements will naturally fill up with resources that are automatically ferried to your base with a packhorse. (Achtung! The packhorse itself can be killed by enemy fire.) All of Battle for Europe's tactical maps are divided into individual sectors, and skirmish maps can be conquered by capturing all sectors, by capturing only those sectors with key strategic points, or by annihilating your enemies. In contrast, battle mode offers one-off missions modeled after battles that actually took place in 19th-century Europe. You'll have no peasants and no resources in this mode--only a set number of different troop types with which you must crush your foes, just like how it happened in the history books.

While the strategic map seems interesting, the essence of Battle for Europe (just like with all other Cossacks games) is its gigantic tactical battles with armies of thousands of 2D sprite-based soldiers surging across the battlefield. While the game offers basic classes of units (footmen, cavalry, and cannoneers), different European nations have different military units with differing abilities and strengths. In addition, you can place your units in one of three different formations, each with its own strengths and weaknesses in terms of attack power, defense, and mobility. However, like with other Cossacks games, you must also keep an eye on your troops' morale and fatigue levels, since troops can become demoralized after being severely injured--they don't need to be completely crushed for this to happen, either. Routed troops will flee from battle, and tired soldiers end up with low morale (which will make them flee more easily). You'll have to carefully balance your troops' spirits against their damage range; most units deal the most damage up close, but that's exactly where swift cavalry units can stomp the fight out of grunts. Fortunately, in the campaign and Battle for Europe modes, you'll be able to select a great leader for your troops with various special abilities that depend on each leader's experience level (which, in turn, is based on how many battles he has won). Among other things, these great leaders can commission much larger armies.

Sure, Cossacks II: Battle for Europe may not exactly conform to the increasingly common fast, slick, easy-to-play look and feel that so many new games end up with. But it will offer deep historical strategy, improvements on the entire Cossacks series (including highly requested multiplayer team options), and, perhaps most importantly, thousands of little guys dying horribly by your command. The game is scheduled for release later this year. 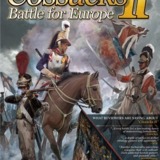