As one of the leading publishers of full-sized retail games for the Wii, Ubisoft has shown much love for Nintendo's new console. The love affair continues, as the French company has announced that it is developing Cosmic Family for the Wii. Developed by Ubisoft's Barcelona studio, the Cosmic Family will be released in mid-2007. The game is being aimed at young children and features "an interactive tour of Cosmic Family's action-packed rocket." There will be 15 minigames to choose from, which range from piloting a rocket into space to brushing a monster's teeth. Ubisoft previously released a series of Cosmic Family edutainment games for the PC. 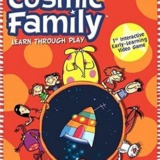