Majesco characterized its Cooking Mama franchise as "alive and well" as part of its most recent earnings report in March, having sold more than 8.5 million units in North America alone. Today, the publisher announced an all-new installment in its flagship kitchen-magic series and a camping-oriented spin-off, both of which are coming for Nintendo handhelds this fall.

Cooking Mama 4: Kitchen Magic is expected to arrive for the 3DS. Culinary minigames are once again served up du jour, as players work their way through more than 200 challenges and 60 recipes. The 3DS's touch screen will factor heavily into gameplay, and the system's gyroscope will factor into tasks that range from cracking eggs and flipping pans to balancing plates.

Nintendo's workhorse DS will also see a new installment in the franchise, Camping Mama: Outdoor Adventures. Also a minigame compilation, Outdoor Adventures offers 100 touch-screen-enabled challenges, which includes crafting a fishing pole and using it to roast a fish, as well as capturing wild chickens or exotic insects. The game includes 38 different levels that span such environments as forests, mountains, and seas.

Majesco also said that it plans to launch three additional cross-platform titles based in the Cooking Mama franchise in 2012. Additional details on these titles were not revealed. 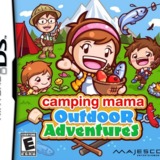