PAX 2009: We try out the upcoming WiiWare Contra title that will remind you of the bygone era when games beat you up and took your lunch money (in a good way).

We were able to try out Konami's upcoming WiiWare branch on the Contra family tree, Contra Rebirth, in Nintendo's booth at this year's Penny Arcade Expo. The new entry in the series features old-school sprite graphics that pop along in their pixelated glory. We were able to try out the first level, set in a space station of some kind, which was crawling with enemies who needed shooting. The level ended with a boss fight that kicked off with the massive space creature crashing through the window.

Who's Making This Game: Konami.

What The Game Looks Like: The visuals in Contra Rebirth are pretty faithful to the 16-bit SNES style of old-school Contra. The key difference is that the action is a bit faster than in the classic game, with a lot of activity going on around you.

What There Is to Do: You'll play as one of two soldiers, Rizer or Yagyu, who are out to save the world from an alien threat. The recipe for salvation is good and simple: run and shoot things. Along the way, you'll collect weapons, which include the fan-favorite spread shot, and do some jumping and climbing. You'll be able to play the game by yourself or with a friend in offline co-op mode.

How the Game Is Played: You'll hold the Wii Remote sideways, SNES style, and use the numerical buttons to jump and fire. You can switch between weapons you collect by either shaking the remote or hitting the A button.

What They Say: The Konami reps on hand stressed the classic gameplay and the comfortable feel of the game as key points of its appeal.

What We Say: The game looks great and handles well. The hurdle for many, as has been the case for Contra since its early days in arcades and on home consoles, is that player mileage will vary. The difficulty is no joke, but by the same token, so is the sense of satisfaction to be had by plowing your way through the game. Fans of the series will likely love the game, but newcomers may be intimidated and possibly turned off by the difficulty. 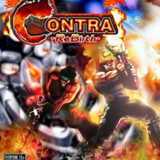