We sit down with the director of Contra: Shattered Soldier to get his thoughts on the game, the series, and the action genre in general.

On our recent trip to the Tokyo Game Show, we had a chance to visit Konami Computer Entertainment Tokyo headquarters to speak with the director of Contra: Shattered Soldier, Nobuya Nakazato, whose previous work includes Teenage Mutant Ninja Turtles on the Nintendo Entertainment System and Castlevania: Symphony of the Night on the PlayStation. Nakazato commented on a variety of topics, ranging from the decision to give the latest Contra a 2D gameplay system to the future of the Contra series.

GameSpot: Can you tell us a little about your background at Konami?

Nobuya Nakazato: I joined Konami 14 years ago as a graphics designer, and I basically worked on a couple of NES games, including Teenage Mutant Ninja Turtles and some other minor games. After that, I was promoted to director and made Contra: Alien Wars for the SNES. Then I worked on Rocket Knight Adventure for the Genesis, which was followed by Contra: Hard Corps. I was starting to get bored with action games and started to think of games with stronger RPG elements, and the result of that was Vandal Hearts. At the same time I assisted the Castlevania: Symphony of the Night team as a graphic designer. Now I'm working on Contra: Shattered Soldier for the PS2 and Contra for the GBA.

GS: Why did you choose 2D gameplay for Shattered Soldier instead of going with full 3D?

NN: Today, 3D is the mainstream. It certainly was possible to make the game in full 3D, but for full 3D games, I think playability ends up being overshadowed by the graphics. Also, developers end up putting more adventure elements into their games when they're full 3D, and that's not really what Contra is about. I wanted to make an action game, and that's why we decided to use 2D gameplay.

GS: How long has the game been in development?

NN: From the earliest concept sketches, about two years.

GS: Have you encountered any problems in developing the game so far?

NN: The idea for 2D gameplay and 3D environments and characters came about quite early, but you never know what problems there are going to be until you actually start development. In 2D everything is on the same plane, but since the environments in Contra are 3D, we had to fake some things. When you're firing at an enemy in a different plane of the environment (in the background, for example), we wanted to make it look as natural as possible.

GS: So you didn't encounter any technical problems with the PlayStation 2 hardware?

NN: No, we didn't have any problems. With the PS2 technology, it made it much easier to do the different types of levels that were much more difficult to do with older hardware.

GS: Why was it decided to give players all three weapons at the start of the game instead of giving them a chance to get them as they progress through the level like in the old Contra games?

NN: Contra is well known as an arcade game, and as an arcade game, it didn't really require much thinking. You just inserted the coin and played. Since Contra: Shattered Soldier is a console game, I wanted to have a gameplay system where the player could think a little more and use the right weapon for the right situation.

GS: Was it a challenge to keep the gameplay so streamlined and simple?

NN: I wanted to keep it simple, so we didn't put in power-ups or anything like that. We also wanted to make it so anyone could pick up the game and immediately start playing it and not confuse them with the controls or make them wonder where they're supposed to go next. Of course, the hit rate system gives a little more depth, so if you want to have a high hit rate, you'll have to use the correct weapon.

It was hard for the development team to make sure that the difficulty level was acceptable, because we play the game every day, so we know what to expect.

GS: Do you think it would be possible to make a true 3D Contra game at some point, or does that style of game just lend itself more to 2D gameplay?

NN: We haven't decided where to go with the series from here. Since Shattered Soldier has a mixture of 2D and 3D, we'd like to see how the market reacts to the design. So the consumer's reaction is what will decide the future of the franchise.

GS: Moving on to the Game Boy Advance game, what sorts of additions are planned?

NN: The SNES version of the game had top-down levels, which we've eliminated and replaced with two stages from Hard Corps. It will also have a link cable feature that allows two players to play at once.

GS: Do you think anything is missing from the action genre?

NN: Other action games tend to go with more story or more adventure elements. Contra: Shattered Solider is pure action, but for other games, it seems like they're a Hollywood movie or it's like you're watching a movie. But with Contra, you're in that movie.

GS: What's your favorite entry in the Contra series? 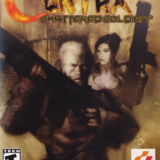