Konami confirms an upcoming PS2 version of its classic shooter. Also, a possible name change for the next Castlevania was revealed.

GameSpot has confirmed that Konami Computer Entertainment of Japan plans to release a new Contra title for the Sony PlayStation 2 in Japan. The company has not announced the game's official title, release date, or price point, but online retailer GameStop does have a listing for a PlayStation 2 game called Contra: Shattered Soldiers. The first Contra console game was introduced in 1988 on the NES, and it was followed by several sequels released on several consoles such as the Genesis, Super NES, and PlayStation.

In related news, a new Contra game for the Game Boy Advance was also spotted on GameStop, as was Castlevania: Harmony of Dissonance--apparently the North American title for the recently announced Castlevania: White Night Concerto. When asked for comment regarding these games, a Konami of America representative simply said that none of these games have officially been announced for the North American market. 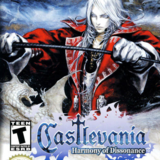