Source: Independent reports from Polish gaming site Polygamia and role-playing-game-centric GameBanshee.What we heard: In December, CD Projekt Red at last made official what many had already long suspected: The Witcher is coming to consoles. As detailed in GameSpot's first look at the Xbox 360 and... 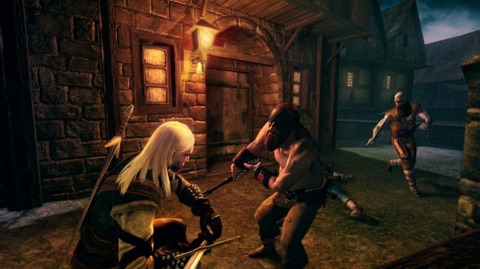 What we heard: In December, CD Projekt Red at last made official what many had already long suspected: The Witcher is coming to consoles. As detailed in GameSpot's first look at the Xbox 360 and PlayStation 3 game, The Witcher: Rise of the White Wolf tells the same story as the highly regarded 2007 PC adaptation of Polish writer Andrzej Sapkowski's dark fantasy universe. However, more than just ports, the console editions were also supposed to feature new content, better graphics, improved AI, and refined animation, among other tweaks.

Now it appears that CD Projekt Red has run afoul of the global economic crisis, forcing it to halt development on the title. On Monday, Polish gaming site Polygamia reported that unnamed sources had confirmed that the console adaptation of The Witcher had been canceled. That information was followed up today by another report from the RPG-oriented GameBanshee, which said that the publisher-developer has made deep cuts at its Warsaw headquarters.

GameBanshee went on to lay out the scenario behind the layoffs. After The Witcher's release, CD Projekt Red reportedly began three new projects based on the Witcher IP: the console port, The Witcher 2, and an unnamed third game. However, CD Projekt Red first reportedly canceled the unnamed Witcher title, pink-slipping nearly all employees associated with the project. Then yesterday, the studio closed the book on The Witcher: Rise of the White Wolf, cutting loose an additional two dozen staff.

GameBanshee's source didn't just offer reports of doom-and-gloom for CD Projekt Red, however. The source also claimed that development continues on The Witcher 2, which is being prepped for both consoles and the PC. All remaining staff and resources have been diverted to this project, the source went on to say. No information on a release window was offered, though Rise of the White Wolf had been scheduled for this fall.

The official story: "We don't comment on rumors," a CD Projekt Red representative told GameSpot. "Any plans will be announced via official channels."

Bogus or not bogus?: CD Projekt Red is hardly the first, and not likely the last, to make concessions in the wake of a tanking economy. Looking not bogus.