We take a look at the sequel to last year's Gulf War action title from Gotham Games.

At this year's E3, Gotham Games was showing off a demo of Conflict: Desert Storm II - Back to Baghdad, the sequel to last year's third-person action title set in the thick of the Gulf War conflict. Though Back to Baghdad is also set in 1991, the game takes a more fictional approach this time around, with a what-if scenario about US troops being sent into Iraq immediately following the expulsion of Iraqi troops from Kuwait. The game will feature around 20 different levels, and it will focus much more on urban-style combat.

The gameplay in Back to Baghdad is very reminiscent of its predecessor, but with a much improved AI system. Enemies will no longer aimlessly run at you with guns blazing, and instead will be much more strategically intelligent, with the ability to communicate with one another and coordinate their attacks. Similarly, your teammates will be much smarter, especially when it comes to the concept of teamwork. In one of the more interesting scenarios we encountered, we had to get from the middle of a firefight to a jeep in a distant part of a level, and our team immediately began to lay down solid covering fire, letting us escape unharmed. It was a well-done sequence, with lots of adaptation by our AI-controlled teammates as the battle began to take shape.

Back to Baghdad is also looking significantly better visually. The game's new urban environments are all quite nice to look at, with all-new textures and bump mapping. The lighting effects and color schemes are much better this time around, with a far less washed-out look and more overall detail and polish. The character models looked about on par with those of last year's game, but with a slightly more rounded look, eliminating some previously irritating jagging effects.

Conflict: Desert Storm II - Back to Baghdad will be available for the PC, PlayStation 2, and Xbox this fall, and the Xbox version will feature Xbox Live support. Expect more coverage of this game in the near future. 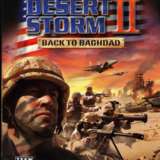