Gamespot takes you behind enemy lines to see Eidos' newest real-time strategy game - except this one is a smart, squad-based game of tactics and wit.

Sometimes you just can't afford to play by the rules. Eidos Interactive's forthcoming Commandos: Behind Enemy Lines is one such case. Your duty is to manage up to six veteran commandos who are deployed deep in German territory at the turning point of World War II to sway things in the Allies' favor. You must order each of them in real time and use stealth, weapons expertise, cunning, and maybe even a little luck to succeed at two dozen all-important missions running from Africa to Norway.

You may be outnumbered - seriously outnumbered - but you've got a few important advantages that may well lead to victory against all odds. For one thing, unlike in your typical real-time strategy game, there's no fog of war in Commandos. You'll see the enemy a mile away from a top-down high-resolution isometric perspective, and you can plan how to deal with him accordingly. Better yet, you can check out any individual enemy soldier's field of vision, represented by a colored cone. Patrolling guards will sweep the area, looking back and forth, and since you know exactly where they're looking, you can sneak around just outside their periphery and strike. On the other hand, if you just dash in with guns blazing, you won't last long at all. Sure, you might drop a German or three, but their buddies will hear the gunfire, and chances are you won't be able to handle the reinforcements. It's true that your commandos are a tough lot; they'll take a bullet for you, and with a medic around they'll even recover from it. But they're not one-man armies. You need to keep them alive.

That means you'll need to use your wits. If a lone guard appears particularly meek, you can order one of your commandos to "accidentally" stumble into his line of sight. He'll order your man to halt and then hold him at gunpoint... even as your spy sneaks up behind the guard and silently stabs him dead, disposing of the corpse behind some trees. But not before claiming the poor sap's uniform, and with it, the enemy's identity. While there are six commandos in total, you never control more than five in any particular mission. All six - from Russell "Inferno" Hancock to Rene "Spooky" Duchamp - have unique personalities and irreplaceable specialties, from demolitions to driving skills to espionage, that must be used in careful conjunction to complete your goal.

You won't always have the luxury of keeping your squad together. As a matter of fact, more often than not you'll need to split your team to accomplish your task. Managing multiple commandos at once isn't easy, but fortunately you can follow each of them with an individual camera so you don't need to jump around the map so much. Unfortunately, your commandos currently aren't much good without your direct orders. They won't even defend themselves if they're being shot at. That may show a lot of discipline on their behalf, but you may find yourself wishing they'd use a little common sense and survival instinct when you're not around to pamper them. So you must micromanage your force as best you can and make sure your other commandos are safely hidden when you're focusing on ordering one around.

Commandos is certainly a fresh take on a familiar genre and setting. Its detailed, colorful graphics and big missions are impressive, and its emphasis on tactics and stealth with the occasional necessity for deadly force is unique and satisfying. What remains to be seen is whether developer Pyro Studios can play up the six commandos' personalities and talents to maximum effect and whether the challenge of having to manage them all at once will be surmountable. A number of recent tactical real-time strategy games, including Myth: The Fallen Lords, Warhammer: Dark Omen, and MechCommander, all were criticized for being excessively difficult for forcing the player to micromanage his squad far too much. And as it stands, Commandos may well be destined for a similar reception, unless Pyro decides to impose a more productive friendly AI and options like speed settings or the ability to issue orders while the game is paused. But however it finally turns out, already it seems clear that Commandos stands to become one of the most original World War II-era computer games to date. 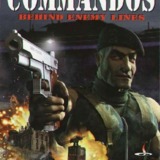