New Line acquires the film rights for the role-playing game that inspired the upcoming Troika game.

All Vampire games are set in an Anne Rice-esque realm called "the World of Darkness," where a highly structured society of undead bloodsuckers exists alongside the human world. In the game, the vampires are divided into seven clans, each with its own abilities and powers. The game's story revolves around the clans' constant struggle for dominance and the entire vampire race's efforts to go unnoticed by humankind.

Adam Fields will produce the Vampire movie under the supervision of New Line executives Luke Ryan and Magnus Kim. Variety reports that New Line is looking for a screenwriter to help groom the property to be a franchise. No director or stars are attached to the project.

While Vampires may feed off the blood of humans, these days it seems Hollywood can't stop devouring games' film rights. Most recently, Paramount signed John Woo to direct a film based on the Rainbow Six series of games. The director himself recently optioned Nintendo's Metroid series and was in talks to direct the Spy Hunter movie, starring the Rock. This year also saw the Doom movie go back into play after Warner Bros. let its contract with id Software lapse. 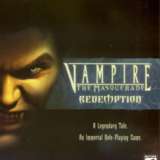