Despite nothing being heard from the game in some time, Tekken X Street Fighter is still in development, Tekken director Katsuhiro Harada confirmed today.

Asked whether development on the game continues, Harada said through his translator (and Tekken designer), Michael Murphy, "It's still in development, and it is moving forward, but that's on the development side. So obviously, with all of the products, there's that special timing that we need for that to have its own spotlight. So on the marketing side, it's a special situation, but we can say that it hasn't been cancelled, so please relax."

It was almost four years ago to the day that a pair of crossover games featuring Street Fighter and Tekken were announced at San Diego Comic-Con 2010. Capcom's offering, Street Fighter X Tekken, came out less than two years later, but updates on Bandai Namco's title have been hard to come by. Harada confirmed it was still in development last year and indicated Bandai Namco was seeking "the right time" to release it. Earlier this year, it was included on the company's official release schedule for 2014, but without a specific release window attached.

Harada was involved with a panel that covered the recently announced Tekken 7 at SDCC today. Not much was revealed beyond the fact that fights will be one-on-one. The gameplay was also said to be unfinished, which is why the teaser trailer that was shown (above) offered no glimpse of the game in action.

After so many years of waiting for Harada and Bandai Namco's take on blending of the Tekken and Street Fighter series, what are your expectations for the game at this point? Let us know in the comments. 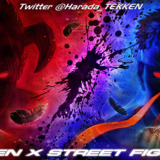